The spreading of dialogue for action against climate change in Croatia 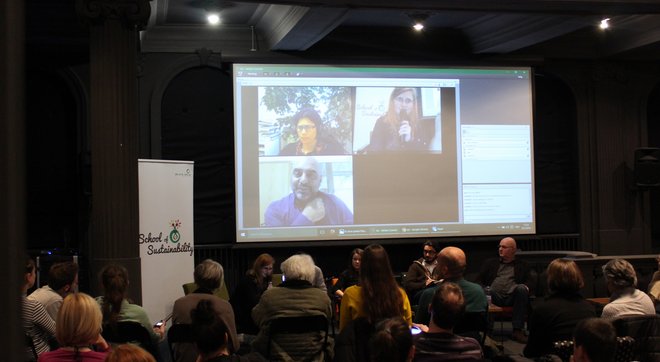 At Monday , 29. February, in the cinema ''Europa'' Friends of the Earth Croatia has organised a panel discussion on the theme of linking the various actors in terms of action against climate change and the premiere of the film "Ovo mijenja sve / This changes everything" inspired by the book by Naomi Klein.

The panel discussion Climate change as an opportunity to build a more just worldwas attended by about 100 people, while the screening of the film was visited by 250-300 people.

At the panel discussion we have heard examples of frequent association of trade unions, social movements and other stakeholders with environmental organizations in Croatia and the world, and why such a connection is important when adressing climate change, which is discussed in the documentary "Ovo mijenja sve / This Changes Everything" (based on the book by Naomi Klein).

Asad Rehman of Friends of the Earth in the UK was a guest through video link and talked about ways of linking social and environmental movements. He commented on the plans of the global climate movement after the adoption of a new agreement on the UN conference in Paris (COP21). "What was agreed in Paris is not enough to prevent catastrophic consequences," concluded Rehman, adding that there is a need to build a global movement for climate and social justice.

Anabella Rosenberg of the International Trade Union Confederation (ITUC), also via Skype, spoke about the role of trade unions in the fight against climate change and stressed that a just transition and securing of decent jobs is needed.

Luka Tomac from Friends of the Earth Croatia has given the national perspective and talked about the importance of mitigating the effects of climate change, but also of adapting to them. The key to action against climate chaos is to stop harmful projects based on fossil fuels, such as coal power plant Plomin C or drilling of oil and gas in the Adriatic, and at the same time developing renewable energy sources.

Marina Ivandić from the Bases for workers' initiative and democratization (BRID) looked back on the existing good co-operation between trade unions and environmental NGOs in Croatia in terms of protection of public goods. The specific co-operation referes to, for example, the collection of signatures to initiate a referendum against the privatization of highways in 2014.

Mladen Domazet from the Institute of Political Ecology has placed an emphasis on the concept of degrowth, conceptual ''framework for a new era", which criticizes the capitalist model of economic growth. "Nothing can grow forever, neither can the exploitation of resources," said Domazet.

Zoran Misic from the Secular Franciscan Order referred to the Pope's encyclical Laudato si' which takes a radical stance on social and climate justice.

After the discussion we showed a documentary ''Ovo mijenja sve / This Changes Everything'' that was created based on the book of the Canadian writer and journalist Naomi Klein. Shot four years on five continents, the film portrays seven communities that suffer the consequences of the use of dirty energy and climate change, from the largest US coal mines in Montana to the Canadian tar oil off the coast of southern India to Beijing and beyond. Connects carbon in the air with the economic system that produced it and the idea that humanity can utilize this existential crisis of climate change to transform our failed economic system into something radically better.