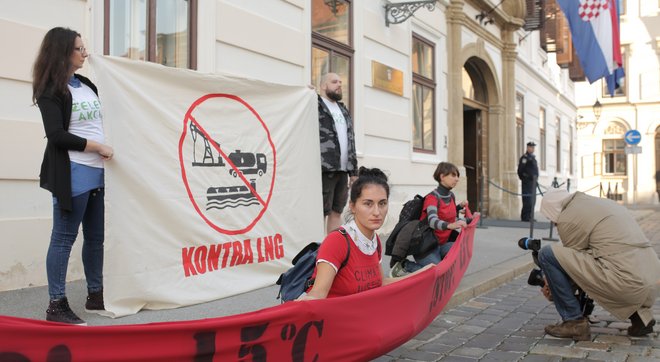 On December 1st, the floating LNG terminal arrived on Krk Island in Croatia, thus marking the finalisation of the project of the Croatian Government. The terminal has been opposed by the entire local community, it will prolong Croatia's dependence on fossil gas and is extremely harmful to the climate.

Even the European Ombudsman warned in a recent report that the European Commission had given priority status to natural gas projects, including the Krk terminal, without properly assessing their impact on climate change. This is exactly what many environmental organisations, initiatives and experts have long pointed out, and in particular the incorrect claim that gas is a transitional fuel.

It should also be noted that this costly project - and time will prove unprofitable in the long run - is being implemented in the midst of a global pandemic and at a time when almost everyone is advocating for a green recovery plan. That should mean investing in renewables and energy efficiency, not fossil fuels. Finally, let's not forget that the LNG terminal is fully financed with public (txpayers) money, ie from the pockets of citizens.

The Croatian Government and the Minister of Economy and Sustainable Development, Tomislav Ćorić, are claiming ambition regarding the mitigation of the climate crisis, but the reality is completely different, and projects such as LNG terminals are incompatible with the fight against climate change.

Zelena akcija/FoE Croatia will continue to advocate an urgent transition to a post-fossil fuels society and monitor the operation of the terminal on Krk, which should start commercial operation early next year.