The Croatian Government and EU are selling our future for LNG! 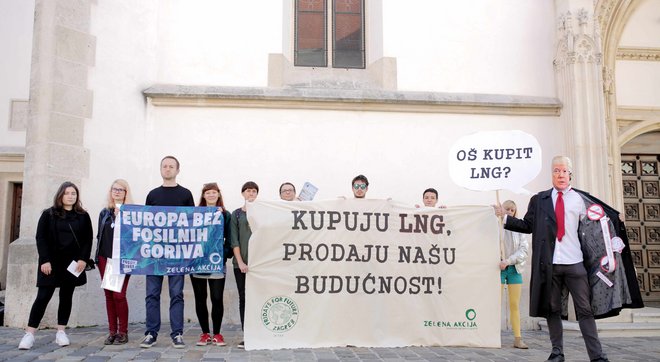 The Youth Initiative "Fridays for Future - Zagreb" and Zelena akcija/FoE Croatia organised a joint action today in front of the Government building and sent a clear message that by building the Krk LNG terminal and continued purchasing of fossil gas politicians are selling the future of young generations.

The protest performance was organized on the occasion of the first Forum of the EU and US Energy Council for LNG export, which is being held today in Brussels, and where the Environment and Energy Minister Tomislav Ćorić is also participating. The purpose of this Forum is to promote further export of American LNG to European Union countries, including Croatia.

During the performance, activists used the figure of President Trump to symbolise the American lobby, which has been undermining ambitious action against climate change for decades.

"The European Union and its members are hypocritical. On one hand, the EU wants to be seen as a climate leader, while on the other hand it's making very damaging arrangements for further export of liquefied "fossil" gas from a country that does not want to ratify the Paris Agreement and whose president doesn't believe in science", said Marija Mileta from Zelena akcija and added: "The same can be said about the Croatian Government, and in particular the Ministry of Environment and Energy, which doesn't doesn't do its job of environmental protection, but rather serves as a PR service for the fossil fuel industry".

Ana Žerjav from the "Fridays for Future - Zagreb" initiative pointed out that by buidling the LNG terminal on Krk we are committing ourselves to long-term import of fossil fuels, ie liquefied methane, which as a greenhouse gas is much more potent and deadlier than CO2.

"Apart from serving corporate interests, the construction of LNG infrastructure will not help Croatian citizens to reduce their household energy costs. Instead, it will jeopardize the local tourism of the Kvarner Coast and the islands, and worst of all, condemn today's young generations to a so-called 'climatic holocaust'. And this means social collapse, suffering and death of unprecedented proportions in the near future as a direct consequence of planetary warming, climate destabilisation and entropy caused, among others, by continued exploitation of archaic fossil fuels such as gas“, commented Žerjav.

Because of all this, 200 civil society organizations from Europe and the US, including Zelena akcija, sent an open letter in advance of the Forum, in which they oppose the increase in imports and exports of LNG. According to a EU-US joint statement, LNG imports to the EU increased by 181% since July 2018.

But continued use of LNG undermines critical climate goals. Instead of stronger LNG development on both sides of the Atlantic, we should be focused on ending the use of fossil fuels, including LNG, as quickly as possible. To do otherwise ignores the existing crucial scientific evidence that proves the significant negative climate role of gas, the consequences for human and environmental health related to LNG (as a result of fracking), and dire economic consequences related to
ongoing fossil fuel consumption.

As far as Croatia is concerned, instead of becoming truly energy-independent by smartly investing in the development of renewable energy sources, it seems to remain only a pawn in the geopolitical game between the EU, USA and Russia. "We do not have time for such dangerous games. The only thing that should be important is to mitigate the climate crisis we are already living in", concluded Mileta.

That is why Croatian students have joined the climate protests of millions of young people around the world and are not planning to give up. "We invite everyone to the 'Climate School Strike' which will be held on May 10, at 2.30 pm on the European Square in Zagreb, seeing the Croatian Government isn't doing its job", Žerjav added.