Public space for gardens and parks, not cars 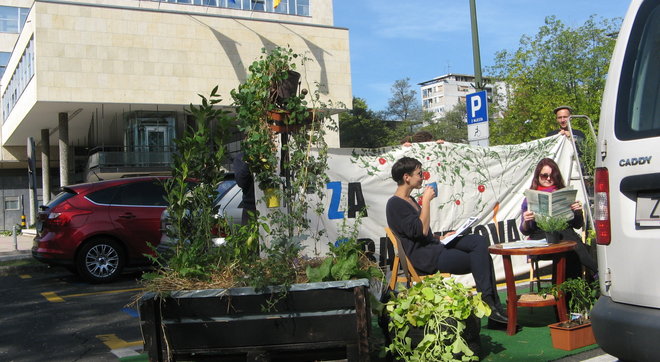 Green Action activists, in cooperation with the Heinrich Böll Stiftung, and with activists from the civil initiative Parkticipation, held a performance today at 11 a.m. in front of Zagreb City Hall. Today is International PARKing day which is celebrated in over 100 cities all over the world and on this day NGO’s and civil initiatives turn parking places into green surfaces; parks and gardens.

In today’s performance we turned a parking space into an urban garden, showing how the space could be used more efficiently and usefully, but also that there is a need for more public spaces open to all citizens

Because of an erroneous traffic policy, which favoured the use of cars, built bad cycling lanes and made public transportation too expensive, the number of cars in Zagreb, until recently, kept rising by about 10.000 a year. This resulted in a situation in which Zagreb’s parking spaces are being used by 400.000 cars. With a good traffic strategy, that encouraged public transportation and bicycling, the number of cars would be reduced by 1%, which would open 48.000 m2 of space that could be open for use to all citizens, for example to grow food. 240 tons of fresh vegetables and fruit could be grown per year on that surface.

With this performance we wish to encourage the City to show at least an equal will to build public gardens in all city quarters, as they have to build parking spaces. The budgetary resources required for investment into gardens are almost negligible, but the benefits would felt by all citizens equally, and not just car owners. In this way, a large portion of food requirements could be met inside city districts. Also, urban gardens within city quarters could reduce traffic and the need for more parking space, because the necessity to transport fresh food from far places of production would be reduced. Citizens would, instead of going shopping to far away shopping centres in their cars, be able to pick fresh vegetables and fruit near their doorsteps. 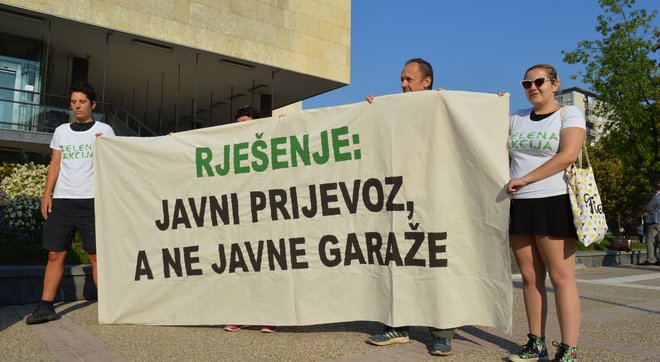 Most of FoE Croatia’s activities over the years have focused on urban transport in Zagreb, and we have also dealt with various aspects of the construction and management of motorways, railway transport and national transport policy in general.