NGOs to the Ministry: The time is ripe to solve the problem of single-use plastics! 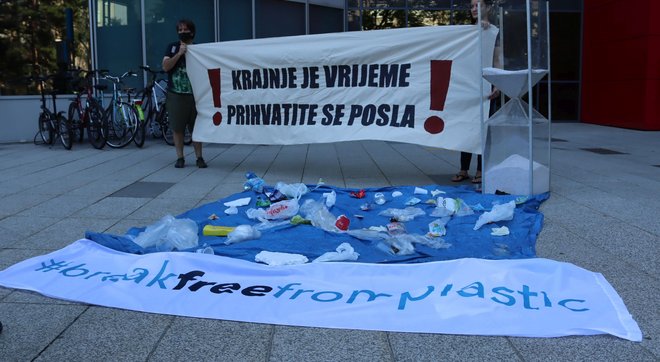 Activists held a performance in front of the building of the Ministry of Environmental Protection and Energetics. Part of the performance was an hourglass, representing how much time has already passed while the Ministry is delaying the process, but also representing the need of urgent action as the pollution continues to rise.

NGOs urged the Ministry to introduce the legal measures that would drastically cut the production and consumption of single-use plastics products, together with the measures for development of reusable systems which will have a positive effect in transition to the circular economy.

“Ever since December 2018, the Ministry has been passively waiting for the deadline for the transposition of SUP Directive while the problems have been escalating. It is obvious that the plastic industry’s lobby is behind this delay.” - Marko Košak from Zelena akcija / FoE Croatia stated.

Blue canvas stretched on the ground with dozens of SUP items scattered around the blue surface symbolically represented the damage caused by plastic pollution in the Adriatic Sea. Recent study has shown that it is one of the three most polluted seas in Europe.

“While Plastic Free Zlarin initiative has proved that it is possible to live without single-use plastics, the whole process behind this initiative has also highlighted the need for a strong legislation. The producers are the ones most responsible.” – said Ivana Kordić from initiative “Za Zlarin bez plastike” (Plastic Free Zlarin), the association Tatavaka. Instead of blaming the consumers, it is necessary to introduce the measure of extended producers’ responsibility, like putting tax on production of single-use plastics. At the same time, it is necessary to secure the funding for the development of reusable systems.  “Introducing reusable systems would have a positive effect both for the environment and the economy. If this would happen, the argument about losing jobs as a consequence of introducing the measures for cutting the production, an argument very often used by the plastic industry, wouldn’t have carried any weight in this case. “ – emphasized Ivana Kordić.

NGO’s are urging the Ministry for more ambition than the one coming from EU.  "Even though there are few items that will be banned from the shelves of the supermarkets by the middle of the next year, as the problem is much wider than these products, we strongly believe the list of the banned items should as well be wider and that the target goals for reduction should be higher.", Marko Košak added.

Apart from the legislation, the problem also lies in the implementation of the measures. Vivid example is the measure for cutting the usage of plastic bags by introducing the obligatory fee for consumers, which doesn’t work in practice and consumers are still getting their plastic bags for free of charge. “Inertia in the implementation of the legislative measures coming from the Ministry is absolutely incredible. Even though the majority of the sellers (mostly big businesses) has complied with the new legislation, there is still no monitoring and there are no reactions in cases of breaking the measures. Since there are numerous examples of governments that have entirely banned plastic bags, such as Rwanda since the year 2008, it is very clear that this change is possible.” – Kordić concluded.

This activity was part of the campaign “Plastic Free July” that Zelena akcija / FoE Croatia is organizing as a member of Break Free From Plastic movement, together with partner NGOs from Croatia.  The pressure will continue until the Ministry finally starts doing their job, start collaborating with cities, municipalities as well as the citizens, and to finally make a switch to reusable systems. 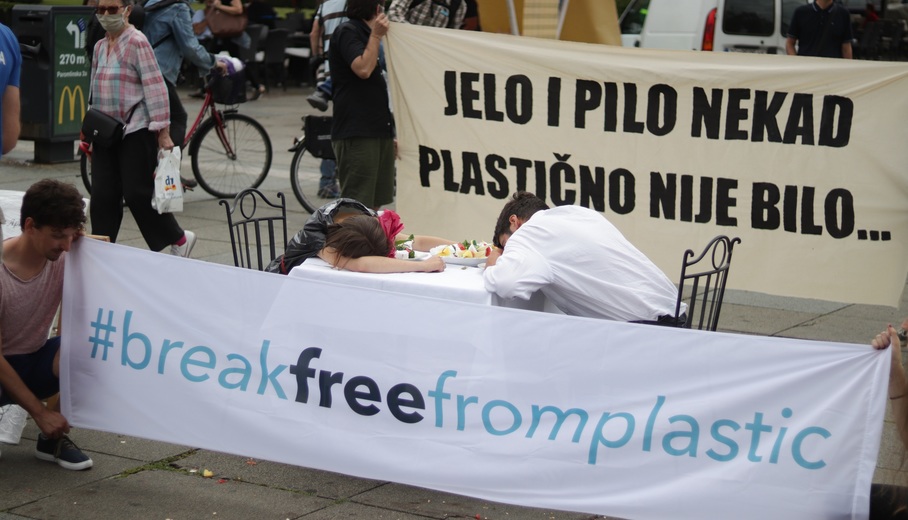 For years, FoE Croatia has been committed to reducing the production and consumption of disposable plastic items nationally and globally, through active work in the global Break Free From Plastic movement.