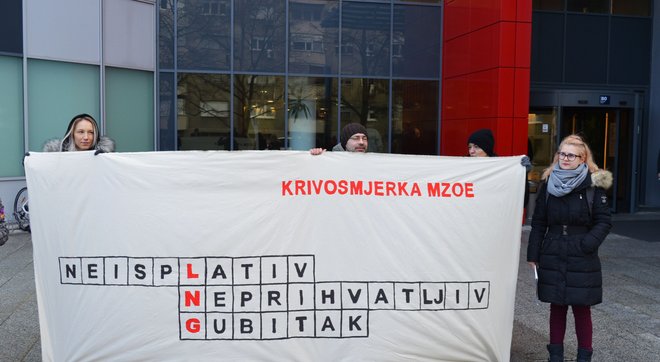 The first hearing for the lawsuit that Zelena akcija/FoE Croatia and Zelena Istra filed against the Ministry of Environmental Protection and Energy's decision that the floating LNG terminal on Krk Island is environmentally acceptable was held yesterday (26.11.2018.) at the Administrative Court in Rijeka.

Apart from Zelena akcija and Zelena Istra, the Municipality of Omišalj and Primorsko-Goranska County are also plaintiffs, and all of the lawsuits have been merged into one common procedure. Despite some differences in the lawsuits, all plaintiffs argue that the Environmental Impact Study (EIA) for the floating LNG terminal is full of flaws and that the procedure is not in line with the spatial plan of Omišalj Municipality or with the county spatial plan.

The main flaws of the EIA are the lack of variant solutions for the location of the terminal and the project itself, as well as the lack of cumulative impact assessment of the entire LNG terminal project (floating and onshore terminal) despite the fact that it's the same project which is planned to be implemented in two phases.