Expansion of the Krk LNG terminal is unacceptable! Sign the petition! 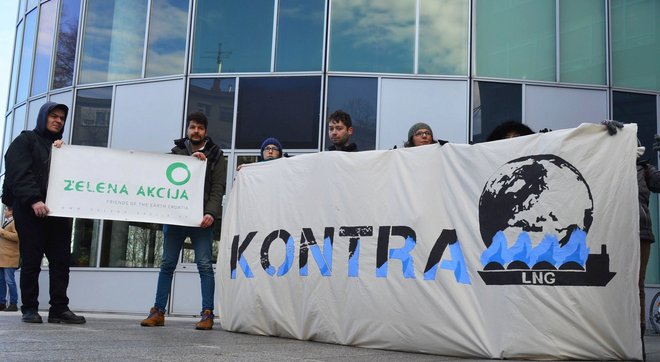 Zelena akcija/FoE Croatia is urging citizens to sign an international petition asking the European Commission not to approve a new list of priority energy projects because it includes harmful projects such as the onshore LNG terminal on Krk Island.

The European Commission is currently drafting its fifth list of projects of common interest (so-called PCI list) for infrastructure projects that would gain access to EU funds and benefit from accelerated implementation. As many as 74 gas megaprojects have applied for a place on this list, and one of the proposed is the continuation of the Krk LNG project, a so-called second phase, together with associated pipelines / interconnectors and a gas compressor. Although nowhere in the documents published on the European Commission's website is it stated what exactly the second phase is, according to the Environmental Impact Study for the floating Krk LNG terminal, it refers to the construction of an onshore LNG terminal in Omišalj.

The EU should not continue to spend hundreds of millions of euros of taxpayers' money on expanding gas pipeline of questionable sustainability and cost-effectiveness. On the contrary, the goal should be to make our energy system fully based on renewable energy sources and energy efficiency measures.

Gas is a fossil fuel that destroys the climate and cannot play a role in our future energy system if we want to stop dangerous climate change. Combustion of gas emits not only carbon dioxide (CO2), but also methane, which in a shorter period of time is as much as 86 times more powerful than CO2. Additionally, if gas leaks only three percent of its methane content, it becomes a higher pollutant than coal, but most European companies ignore methane emissions. Therefore, it is a scientific fact that gas, as a fossil fuel, cannot be considered a transitional fuel in solving the climate crisis.

The European Commission has repeatedly promised that the next PCI list will be aligned with the European Green Deal. However, this harmonisation means that this list should not include gas projects. In addition, the European Ombudsperson warned in her report that the Commission had given priority status to gas projects on previous PCI lists, including the floating LNG terminal on Krk Island, without properly assessing their impact on climate change.

The public consultation on the draft PCI list is open until April 8. Following the closure of the consultation, the Commission will present responses to the regional groups in order to assess the projects and finalise the list which is planned to be adopted by the end of 2021. This is a crucial moment to tell the Commission that no gas project should be given priority status!

The petition was prepared by the European organisations Food & Water Action Europe and Climate Action Network Europe. Read more about the projects and the specific problems identified by the aforementioned organisations.