More than 20,000 people came yesterday on the main square in Zagreb to send a strong message about the culmination of 20 years of carelessness and incapacity of Mayor Bandic, and demanding thorough system changes. The protest was organised by Zelena akcija - Friends of the Earth Croatia (Zero Waste Croatia Network coordinator) and few partner NGO's who are calling for better separate waste collection system and opposing Mayor's plan to multiple increase monthly bills of citizens.

The situation with the waste collection in Zagreb escalated last year because Mayor pushed system with street containers that often become illegal dumpings due to lack of control and regular collection. Beside that, the City Assembly has voted the new model of payment. The new model is unfair, especially to those who have a small amount of waste or separate a lot. All citizens should have to pay a mandatory fixed part of 10 EUR that will cover 70-80% of total bill, regardless of how much waste they produce. Fixed part would be complemented by a variable part that makes only 20-30% that means citizens have very little influence on their monthly bills. The total cost of the bills will be several times higher than before, without system improvements.

These changes, under the pretext of improvement, are creating an unfair payment model. The protesters gathered at the protest with a loud whistle and many banners showing what they thought of the proposed, so-called, “improvement”.

"We will not allow the damage to the environment and the citizens caused by the lack of common sense and inability of Mayor's government, as well as unnecessary employment in Čistoća (local waste management company), to be imposed to be payed by the citizens, by using public money" - said Marko Košak from Zelena akcija - Friends of the Earth Croatia.

NGO's and citizens’ initiatives demand demand thorough changes, both in the payment model and in the overall waste collection method, which clearly doesn't work. Otherwise, citizens will even more strongly fight against the Mayor’s way of completely disregarding the needs and will of citizens and environment protection.

“There is no valid reason for the announced price increase and unfairness of the payment system, except to do damage to the environment and take money from the citizens. We urge everyone to protect their rights to a healthy life and environment, as well as a fair waste collection and management system, ”said protesters.

Photos from the protest are here. 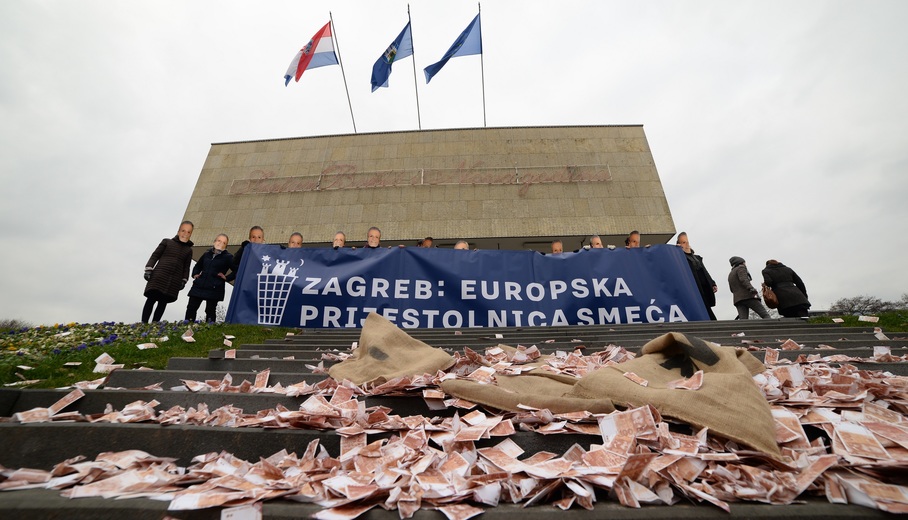