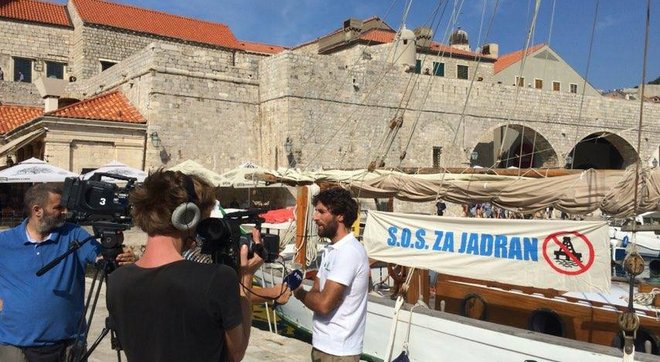 A press conference was held in Dubrovnik today for the international tour of the Italian ship Goletta Verde, organised by One Adriatic, a network of environmental organisations fighting for an oil-free Adriatic.

As part of the traditional campaign of the marine conservation organisation Legambiente, the ship travels along the coast from Dubrovnik to Vlora in Albania. Immediately after Dubrovnik the ship will visit Bar in Montenegro. The aim of the tour is to highlight the threat and harmful effects of oil drilling associated with exploitative projects in Montenegro and Italy. The immediate threat comes from Montenegro.

The Montenegrin seabed is divided into 13 operational areas. Four of the exploration areas near Ulcinj have already been assigned to the Italian/Russian consortium Eni Novatek. Contracts with the relevant parties have been signed and adopted in Parliament. The Government is also planning to sign new contracts with the Greek consortium Energean Oil & Gas shortly, relating to two exploration areas, the locations of which are still unknown. The contracts will subsequently be handled according to parliamentary procedure.

"We urge the Government to suspend the signing of new contracts immediately and to introduce a moratorium on all oil and gas exploration in Montenegro. Our development towards an environmentally aware country should be based on the principles of sustainable development and sustainable tourism", commented Milica Kandic from the organisation Green Home.

"It is important to emphasize that the inhabitants of the Bar and Ulcinj regions have not been adequately informed about the oil and gas exploration plans in the Montenegrin seabed, or about the potential consequences on tourism, a lifeline for many of the inhabitants" added Kandic.

Andrea Štefan, a representative of WWF, said on behalf of the coalition S.O.S. Adriatic that "The Adriatic is very sensitive due to its enclosed nature and very slow water throughput. Its fragile ecosystem is already under great pressure. We ask the new Croatian government to exercise its rights and ask neighbouring governments for the complete protection of the Adriatic Sea as a common asset. The Adriatic is unique and no one has the right to endanger it. Unilateral decisions of the Montenegro and Italian governments are a pattern of behaviour that is not compatible with the new economy and transition to a fossil fuel free society. Organisations from all Adriatic countries are united in protecting their common sea, and we ask the same of the respective governments."

Mattia Lolli, representing the Italian organisation Legambiente, added: "The Adriatic is still under attack from oil companies. In Italy, Geo Spectrum wants to carry out a new seismic survey of an area of 13 000miles2, despite great opposition from local communities and regions. The exploration will be carried out using the 'air cannon' technique, which has a very damaging impact on fisheries and biodiversity, especially on mammals such as dolphins and whales. This project will result in negative consequences on both sides of the Adriatic, so we must join forces and do everything we can to stop it."

The Dubrovnik campaign 'Srđ is ours' also criticised the exploration and exploitation of oil in the Adriatic. A representative of the Đuro Capor campaign commented on the oil project in Montenegro: "It is very worrying that despite a similar damaging project being blocked in Croatia, we have parts of the Adriatic (about 30 miles from Dubrovnik or less) now directly threatened by new exploration activities in order to exploit oil. The projects in Montenegro are a great danger to Dubrovnik and southern Dalmatia because the sea currents would convey the pollution to the Croatian coast. Experience with waste indicates that Dubrovnik will be affected by any activity off the coast of Montenegro".

The network One Adriatic has brought together in Dubrovnik environmental organisations from countries with access to the Adriatic Sea, as well as WWF, Greenpeace, Green Action (Friends of the Earth Croatia), Green Istria, Green Home from Montenegro and Legambiente from Italy.